I want to climb Kilimanjaro, but I don’t know which route is the most suitable.

Here we offer information to give an overview of the main routes of ascent, omitting technical details. 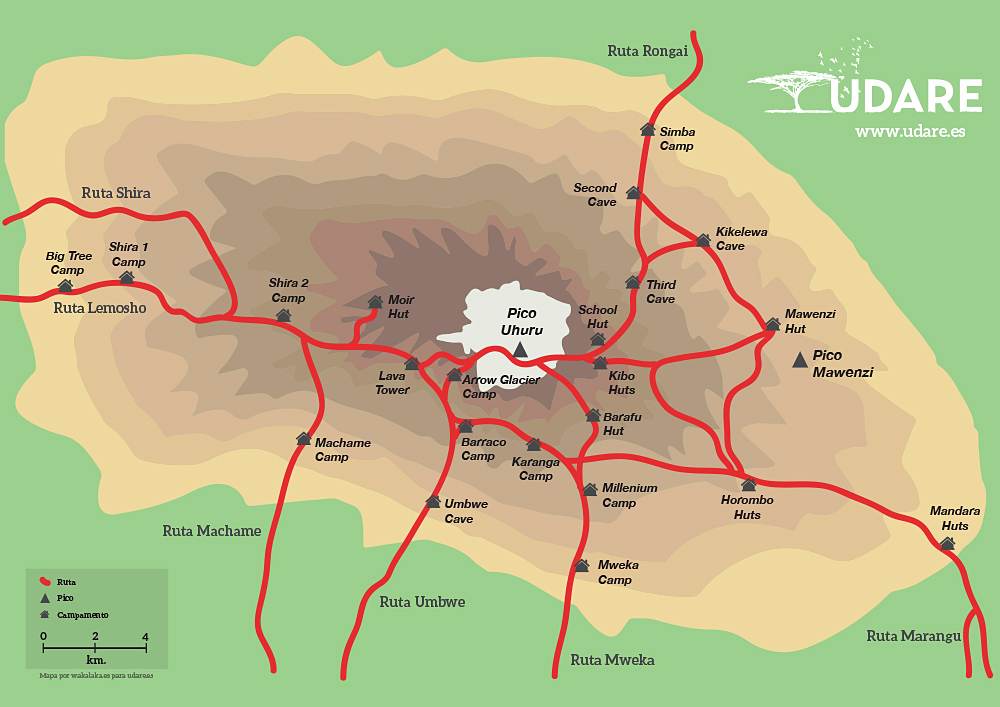 It is the oldest and most popular route.

This route’s popularity is such that it is known as the “Coca-Cola route».  There are some who attribute this nickname to its popularity (comparable with the soda brand), that you can buy soft drinks and candy in different positions during the ascent, and that the rise is so slow but continuous that one can drink soda during the ascent. Everyone may draw their own conclusions.

For those less experienced mountaineers this is an attractive path, because the rise is gradual and simpler than other routes, avoiding steep trails. It is also the only route that offers the possibility to sleep in cabins rather than tents.

However, its popularity can prove deceptive. Nonetheless it is easy and the rate of success reaching the summit bears this out. The rise is gradual and does not offer very good acclimatization.

Sleeping in cabins is very valuable when there are plans to make the ascent during the rainy season.

Scenically the path is not too attractive due to making the ascent and descent on the same road.

This is the second most popular and therefore busy route.

It is a route considered difficult, suitable for mountaineers experienced with long days and steep areas. it has received the nickname «whiskey route» as opposed to “Coca-Cola route», by its greater hardness.

Despite his difficulty, it offers a better acclimatization than other routes.

One of the most attractive aspects is its scenic diversity since it is carried out in 5 different climatic zones.

It is a relatively new route.

It is one of the most recommended routes, since it offers a better acclimatization, beautiful views and is not as crowded as the Marangu route.

In the middle of the route it converges with the Machame route, so it is at this time when there is an increase in density of mountaineers.

Ultimately it is considered by many specialists as the most recommended route due to the highest rate of success in reaching the summit and for its great beauty.

The only route that reaches the summit from the north, near the border with Kenya.

It is a route suitable for those who prefer to avoid the most popular and therefore most busy routes, as well as for those who ascend Kilimanjaro in the rainy season, since the north face receives less precipitation.

It does not offer a better acclimatization and the final section is considered to be more demanding than other routes.

The landscape is not as varied as in other routes, but there are unspoiled landscapes and greater opportunities to see wildlife in the early days of the route.

It’s a short, direct, and vertical route which does not provide a correct acclimatization.

It can be an attractive route for those well suited to high mountains and people who do not require great acclimatization. Otherwise, other routes are generally preferable.